The 12 Healing Oils Of The Bible

The 12 Healing Oils Of The Bible – God is always taking care of us. Even when we are bothered by illness. Healing essential oils are a gift from God that we can use for healing and improving our health. The healing properties of these 12 oils are already very well known. But did you know that they were used for thousands of years and they are mentioned in The Bible. The mentioning of these healing oils in The Holy Bible is not coincidence. God wants us to use them. Because they are natural healers. With no side effects or harmful compounds. Let’s see the 12 Healing Oils Of The Bible.

The 12 Healing Oils Of The Bible

Frankincense – this essential oil is mentioned most frequently in The Bible. And it was used by our ancestors for numerous purposes. For example: used on altars, as perfume, currency, in rituals and it was one of the Magi’s gifts for the child Jesus Christ.

Aloe Vera – this essential oil is very popular because it was used as ointment for Jesus Christ, after His crucifixion. It was also used in healing, as incense and as perfume. Aloe Vera is still a great healing plant in our days. And you can find it in many beauty and healing products. 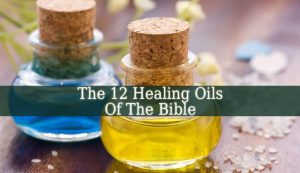 Cedarwood – this powerful healing oil was used in cleansing leprosy. But it was also used in rituals and as perfume. Even Solomon mentions it as a sacred essential oil in I Kings 4:34. Cedarwood contains very powerful antioxidant compounds. Therefore, it was a great option for healing and cleansing wounds.

Myrrh – it is another popular item in my top 12 Healing Oils Of The Bible. It was also a gift for the child Jesus Christ from the Magi, such as Frankincense. It was also used in rituals, on altars and as incense. Mixed with wine, Myrrh was given to Jesus Christ on the cross, to ease His pain. It was often eaten mixed with spices for healing. And used as ointment.

Cassia – it is some kind of cinnamon. More specifically, it is the inner bark of the plant called Cinnamomum Cassia. The essential oil of Cassia was used often in healing and a perfume. But it was also a popular anointment. With a specific and pleasing fragrance.

Cypress – this powerful healing pant appears numerous times in The Bible. It was used as currency, perfume and many more. Cypress wood, due to its properties, was a great choice for making weapons.

Hyssop – this powerful plant with precious properties such as anti-fungal and anti-bacterial was used often in cleansing and rituals. It even appears in John 19:29 as the stalk for the sponge soaked in wine. That was given to Jesus Christ on the cross.

Myrtle – this plant was popular in ancient times. It symbolized abundance and provision. But it was also used in healing. Myrtle appears in the Bible 5 times. They often used Myrtle wood in the construction of ceremonial booths.

Galbanum – it is a plant with a very delicate and beautiful fragrance. It was used in rituals and ceremonies as a perfume. As described in Exodus 30:34.

Spikenard – this plant appears multiple times in The Bible. And due to its beautiful fragrance, it was often used in aroma therapy and as perfume. But it was also used as ointment. It is even mentioned in John 12:3 as ointment given to Jesus Christ after His crucifixion.

Rose Of Sharon – this plant is only mentioned once in The Bible. The Song of Solomon 2:1 mentions this plant. This plant knows some controversy, because it was translated in multiple versions. And we don’t exactly know which version is the best.

Onycha – the last one on my 12 Healing Oils Of The Bible list. This is another mysterious essential oil. Many thinks that it was a flowering plant, because it was used as a perfume in rituals and on altars. As mentioned in Exodus 30:34. But there are theories that identify Onycha as the shell of a mussel.

In conclusion, these 12 Healing Oils Of The Bible are literally in the Holy Scripture. And they were used by our ancestors for different purposes. But mostly for healing and treating conditions. Most of these essential oils are popular even today. And they are used, not only for healing, but also in aromatherapy.

Share
Previous Shaman Chakra Healing
Next How To Find A Shaman?