A Person Who Practices Hinduism Would Most Likely Believe In The Vedas – Also known as the oldest Hindu scriptures, The Vedas are written in Vedic Sanskrit. These ancient texts are the oldest scriptures in Sanskrit. The Vedas belong to the Shruti. Which are ancient Hindu works transmitted by word and hearing. The word “Shruti” translates as “what is heard”. 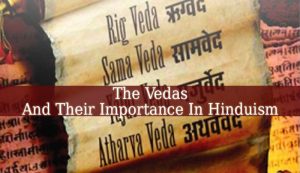 The Vedas are revelations of ancient priests. These Hindu works contain the sages revelations during meditation. But they also contain some ancient. Preserved in a very careful manner. The Vedas are the oldest and most important sacred texts for the followers of Hinduism.

There are 4 parts of the Vedas:

And they also contain four major types of texts:

Rigveda Samhita – the oldest collection of Hindu texts. It contains over 1000 Sanskrit Hymns (over 10,600 verses). Containing 10 major books. These hymns are all dedicated to Regvedic Deities such as Indra, Vritra, Vala and many more. The Rigveda Samhita starts with a small book and a hymns to Agni and Indra.

Samavita Samhita – it is a collection of over 1500 stanzas. These stanzas are mostly from the Rigvada. The exceptions being 75 mantras. This collection divides in two major parts. The Gana includes four melody collections. And The Arcika contains three verse books.

Yajurveda Samhita – it is a collection mantras and ritual offering formulas. This part of The Vedas contain knowledge told by priests. The oldest parts of the Yajurveda contain 1875 verses. And it divides in two major parts: Krishna and Shukla.

Atharvaveda Samhita – it is a collection of texts which belong to the Atharvan and Angirasa poets. Also, it contains 760 hymns. From which, 160 also appear in the Rigveda. Atharvaveda also known as “The Veda Of Magical Formulas”.

A Person Who Practices Hinduism Would Most Likely Believe In The Vedas – In conclusion, The Vedas are one of the oldest texts on the globe. And they are also the oldest Sanskrit Hindu texts. Containing sacred knowledge and teachings from the earliest priests. Therefore, they are the most important texts for Hindus.