Home / Spirituality / A sacred Hindu Song Is Called A Bhajan

A sacred Hindu Song Is Called A Bhajan – Bhajans are very important in Hinduism. In Hindi “bhajan” means “sharing”. But it refers to religious songs that should be shared. The Bhajans are an important part of the Bhakti Movement. Which also influenced the Hindu art.

As I mentioned below, the Bhajans are important parts of Hinduism. But they are mostly used in in other Hindu Traditions such as Vaishnavism, Jainism and Sikhism. 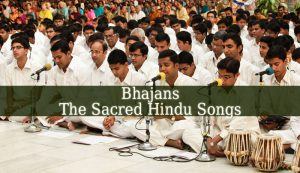 The bhajans are inspired mostly by:

The Hindus sing these bhajans, not only in temples, but also at home, sacred places or in nature. And they are, basically, the equivalent of the Christian church songs.

Sometimes, the lead singers of bhajans are accompanied by instruments and even dancers. These beautiful holy songs are free. In other words, they don’t have a standard form to follow. The bhajans don’t follow a rule. They are words and phrases with a message, song with a melodic raga.

In Hinduism, the bhajans are moslty used to show devotion to the avatars of deities such as Vishnu, Krishna, Vitthala or Narayana.

The Hindus sing Bhajans mostly in groups or choruses. Praising the same saint or deity. These events where people sing bhajans are highly important for the Hindus. They allow people to contribute to the liturgical experience. Through these sacred songs, they feel uplifted and more spiritual. The Hindu participants also create bonds through bhajans. They become more united. Because they praise together the same deity, event, saint.

Some of these bhajan singing events also include food sharing and re-connection. People share their spiritual experiences and faith. Improving the community and the bound between the Hindus.

The History of The Bhajans

Their history is centuries long. They firstly appeared due to the Bhakti Movement. Which took place in the medieval Hinduism. Due to the long centuries, the songs survived, but the writers of the older songs are anonymous.

These songs were passed down by generations to generations as community traditions. But there are also many newly composed Bhajans. And the beautiful thing is, that any Hindu is free to compose a Bhajan. It depends on each individual’s inspirations and needs. So, if a Hindu can’t find a bhajan that suits their need, they can start to compose their own personal song. It’s like saying a prayer to God, in Christianity, that comes from the heart. There are no rules, you just say what you need to say. And what comes into your mind.

Bhajans are a beautiful and uniting part of Hinduism. Which survived centuries due to faith, traditions and the communities.

Share
Previous Evoking A Hindu Ritual, Subodh Gupta Did What Outside The Church That Housed His Very Hungry God?
Next Does Hindu Eat Pork?