What Is Andean Shamanism?

Andean Shamanism – it is an ancient Inka belief. Andean Shamanism is a belief that has one single important law. This law is The Sacred Art Of Ainya. Which consists of respecting every living thing. Also, known as the Principal of Reciprocity. Also, Andean Shamans doesn’t know the concepts of good and evil. They know only about heavy and light energies or entities.

Andean Shamanism – The Planes Of The Andean Cosmos 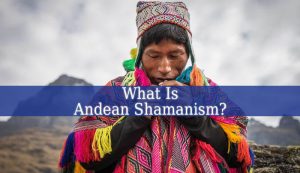 Hana Pacha – it is the first plane, also known as the superior world. Here live Ascended Masters just like Jesus and Buddha. This is the plane of the most wise and refined spiritual beings and energies.

Kay Pacha – it is the second level. Also known as the middle world. And it is the world that we live in. It is this physical 3d world. Here you can find both heavy and light energy.

Uhku Pacha – it is the third plane. Also known as the underworld. This world is not physical as they Kay Pacha. It is found not only within the physical earth that we live an. But also in every living being.

The characteristics of an Andean Shaman

The Andean Shamans or priests are not material human beings. They only cherish the spiritual world and energies. Material things have no value for them. They are some kind of day-dreamers for normal materialistic people. But the Andean Priests were raised like that. They were never concerned about physical wealth or abundance.

But, on the other hand, they respect the material things of this world. They consider that every creature, living or not, has a soul or spirit. Andean priests also cherish sound and the frequencies. They are important manifestations of the Kausay Pacha, the infinite varieties of energy.

Andean Shamanism consists of communicating with with the spirits or energies that manifest in this world. This belief is filled with mystical rituals and experiences. It introduces you into a magical world of spiritual beings and energies.

The Andean Mystery Teachings allows us wisdom about respecting and being kind toward every creation in this world. And to respect and adore the power of nature. Also known as Pachamama. Our spirit and physical body in a beautiful connection with Pachamama. She embodies the feminine, mothering energy. Pachamama is our source of imagination, creativity and intuition.

Andean Shamanism is a whole new universe. It is beautiful and filled with love for everything on earth. It teaches you compassion, kindness and gratitude.