Anglo Saxon Shamanism – The culture and beliefs of the early Anglo-Saxons is not very well known. This is due to the lack of written documents, manuscripts and other sources. Most of the information about Anglo Saxon Pagan beliefs come from old burials. But it is sure that this culture used magic and witchcraft. And they worshiped various gods, most of them also worshiped by Vikings. The sources on Anglo Saxon Shamanism are very shallow. And we don’t know much about their beliefs. 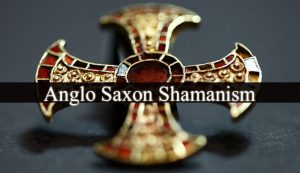 First of all, Anglo Saxon Shamanism does not exist. Their beliefs were similar to the shamanistic rituals and mindsets. But the Anglo-Saxons used magic and witchcraft. And they called it witchcraft (“hægtesse”). They used rituals, incantations, charms and herbs to heal and to pursue their rituals.

The Anglo-Saxons were pagans and polytheists. They believed in many gods, most of them also known in the cultures of the Vikings. Most of these gods were found in burials and depicted on possessions of the diseased.

The chief god was called Woden. His name and his title is very similar with the Viking god Oden. Other gods were Tiw and Frigg. The Anglo-Saxons also worshiped Thunor their version of the Viking god Thor. But they also had goddesses. The spring goddess was Eostre.

The Anglo-Saxons healed with magic, witchcraft, rituals and herbs. We don’t have many records about the exact rituals they made. But there three manuscripts about their medicines and cures. The three manuscripts are Bald’s Leechbook, Lacnunga and The Old English Herbarium. These books contained the herbs thy used for different diseases. They also listed which plant heals which organ and part of the body. But even these manuscripts are believed to be just a fraction of their whole knowledge and wisdom on healing.

The burial rituals differed, but not on areas or cultures. Even in the same villages, archaeologists found people buried in two different ways. The Anglo-Saxons sometimes cremated the diseased before bury, other times buried them without cremation. The causes why they would cremate one, and not another is not known. But they always placed possessions of the diseased into the grave. They believed that they will need those objects in the afterlife.

The Anglo-Saxons were a deeply pagan culture. Their conversion to Christianity started in about 597 a.d. When the Christian Church from Rome sent Augustine to England. He firstly converted the King of Kent And then built the first Christian church of England, in Canterbury. Slowly the number of Christian raised. And the old pagan beliefs were suppressed by the Christian majority.

The old manuscripts were destroyed. And the whole culture just disappeared with their beliefs. As I said before, there is a lack of sources that would show us what they really believed in. I bet that their belief system was fascinating and interesting to analyze.

In conclusion, Anglo Saxon Shamanism does not exist. But there is Anglo Saxon Magic and Witchcraft. And you can find some rituals and charms that were passed from generations to generations. Being integrated in Wicca and other witchcraft based religions.