Black Butterfly Meaning – These beautiful creatures are often mistaken with something evil or dark. But did you know that a black butterfly can symbolize also something good? The spiritual realms are constantly trying to communicate with us. And the butterflies are often signs from the afterlife. Let’s see what else do they mean. It might seem an Apocalyptic omen, but it does not always symbolize something negative! 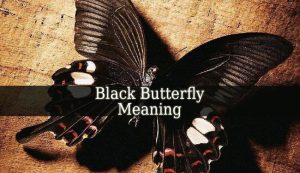 The symbol of rebirth and change – due to their metamorphosis, black butterflies often symbolize a new beginning or rebirth. It is a sign that major changes are on their way. It can be a spiritual or physical transformation. And you have to face it and own it. Change is necessary. Use that new beginning to transition into something better.

The symbol of omen and death – in many cultures, black butterflies are messengers of death and bad luck. For example, in many parts of the world a black butterfly in flying around in the house is a bad sign. It is a sign that a family member will die. Also, they often appear in or around the house when someone already died. Hence, the beliefs that black butterflies are carriers of diseased people’s souls.

The carries of souls – in many parts of the world, especially in Europe, black butterflies are seen as physical manifestations of dead souls. There’s an Irish belief that I must mention. The Irish people believe that souls that can’t find their path to the Afterlife will turn into black butterflies. And fly around the world until the end of time.

The symbol of freedom – black butterflies are joyful little flying creatures. They fly wherever they want. Their flight is gentle and silent. These beautiful creatures often bring inspiration. And a clear mind. Watching a black butterfly hover around the flowers is a great way to relax.

Black Butterfly Meaning – the black butterflies are beautiful creatures. They mostly are considered an omen. But they don’t symbolize only death, but also rebirth and freedom. And as a symbol of death can be a death or end of certain negative emotions and situations from your life.