The 3 Branches Of Judaism

The 3 Branches Of Judaism – In our days, Judaism is not just a simple religion. It is more complex than most of us think. For example, Judaism has 3 major branches. These branches are a classification of the three major categories that Jews fit in. Although, there are people who don’t fit in neither of these branches. But they are exceptions. Each of these Branches Of Judaism are different, not only the period of their appearance, but also as their beliefs.

Orthodox Judaism – also known as the traditional Judaism. It is the very first form of Judaism. And it represents the base of the rest two branches. You also find this branch under the name of The Traditional or Torah Judaism. Their most important scripture is the Torah. In this branch the view of God as a spirit is the most powerful. In Orthodox Judaism, God is everything. And man is half good and half evil. It is up to the man which half he grows. Another big difference is that Orthodox Judaism don’t believe in The Original Sin. They also have a different look upon The Messiah. In Orthodox Judaism The Messiah didn’t come yet. He will be a a powerful human being, not a godly being. 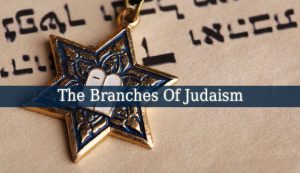 Reform Judaism – also known as The Progressive Judaism or Liberal Judaism. This branch appeared long after the appearance of Orthodox Judaism, in the late 18th century. The sacred scripture for Reform Judaism is still the Torah. But they see The Torah as man written document or history book, not as the words of God. Their perspective on God is very different from the Traditional Judaism. In Liberal Judaism God is a mysterious and supernatural force. And they consider that human beings are good as nature. The Original Sin is non existent for this branch either. Also, in Reform Judaism, The Messiah will not be a human or godly being. But more likely the goal or Utopia that the whole humankind moving toward.

Conservative Judaism – the most recently appeared of the 3 Branches Of Judaism. This branch started in the 19th century. Conservative or Historical Judaism took life to create a middle path between the Traditional Judaism and the extreme Liberal Judaism. These two branches were too different and extremist. Conservative Judaism has the higher number o followers compared to the other branches. Their sacred scripture is The Bible. And Conservative Jews consider The Bible the words of God and man. And their view on God is between Orthodox and Reform Judaism. Therefore, Historical Judaism is less atheist than Reform, at least on the way they see God. Also, their view on man is different. They consider themselves the “partners” of God.

These are the 3 main Branches Of Judaism. They are all different. And they have their own followers. Therefore, now you see that Judaism is not a simple religion. And you will know the main differences between it branches.