The 3 Branches Of Sikhism

Branches Of Sikhism – Originating from the Pujab Regon in India, Sikhism is an Indian Religion with a great impact. Although, it is relatively a young religion. It was founded by Guru Nanak in the 15 century. Sikhism is a very peaceful religion. It strives for peace, unity and equality of humankind.

Although this religion is not that old, it still has many branches and sects. Each of which contains some similarities with Sikhism and some particular ideologies. There are 3 major Branches Of Sikhism that must be mentioned.

The 3 Major Branches Of Sikhism 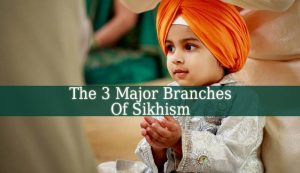 Khalsa – also known as Singhs. It is the first and most higher branch. This is the branch of the Sikhs that have been baptized.

Keshdhari – it is the second branch. This branch contains all those Sikhs who are not baptized yet, but they stopped cutting their hair or wear a turban.

Regardless the branch that a Sikh belongs to, he still has to accept The Rahit Maryada. Which is the The Sikh Code Of Moral Conduct. It contains guidance and advice, not only regarding the philosophies of Sikhism, but also linked to the religious rites. The Rahit Maryada contains the teachings of 10 gurus, starting with Guru Nanak.

The Sikh code of moral conduct contains numerous teachings among which are the teachings about free will and the way humankind sees right and wrong. The followers of Sikhism, regardless the Branches Of Sikhism, must vow for 3 major principles.

The 3 Major Principles Of Sikhism:

The Sikhs have many rules to follow, but the principal is to be kind and help others. You have to be compassionate and think of others too. Because if you think only about yourself, then you live against that Sikh code of moral conduct. Helping others is important, not only for them, but also for the purity of your soul.

The followers of Sikhism must act with modesty and humility. And if a follower earns an honest living, he must donate 1/10 of his earnings to those in need.

Sikhism also strives for equality. They are equal in the eyes of the one creator. And they must act like equals.

In conclusion, Sikhism is a very kind and social justice preaching religion. And there are 3 major Branches Of Sikhism. Which are distinguished by the principles, vows and responsibilities of the followers from each branch. Sikhs are compassionate and loving people. They strive for equality and peace. Which are highly needed nowadays.

Share
Previous What Do Both Jainism And Sikhism Strive To?
Next The Religion Of Sikhism First Developed In