Does Christianity Believe In Karma? – The concept of Karma is linked to Reincarnation. Which are both unfamiliar concepts for Christians. Karma is a religious concept found in Buddhism and Hinduism. Karma is some kind of judgment. But this judgment will not lead you into heaven or hell, but into another life on earth. Therefore, according to karma, if you lived a good and kind life on earth, then you will have a fortunate life after reincarnation. On the other hand, if you lived a wicked life and harmed others, you will have painful life after your next reincarnation.

In other words, every negative and harmful action has consequences. What harm you did to someone, you will get back. And this “eye for an eye” action happens to maintain some ind of karmic balance. So, if you punched somebody in the face, you will be punched on the face yourself. Hence, you will feel exactly the amount of pain you provoked to others. 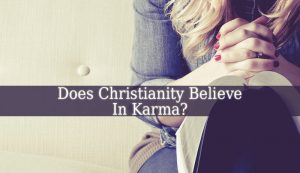 The answer is No, there is no karma in Christianity. And there is no reincarnation. But there is judgment. According to The Bible, human beings only die once. After their death, every human being faces judgment (Hebrews 9:27). Therefore, a person is only born once, he dies once and then he is judged. Christianity rejects the idea of reincarnation and an endless cycle of life, death and rebirth.

The Judgment in Christianity is a really serious thing. Because it doesn’t give you second chances. You live only once. And after death, you have to accept the consequences of your actions during your life on earth. After the judgment there is no rebirth or a new life, another chance. According to your actions, there are only two places your soul will spend eternity. Either you did good and your spend eternity with God and Jesus Christ in Heaven. Or, due to your evil and harmful actions, you will suffer eternally in hell. And the main focus of each Christian is to avoid hell. By good deeds, actions and kindness.

To avoid hell there is one important thing to do. To love. Because love is a powerful feeling. Love God, Love His Son, Jesus Christ with your whole heart. Also love every human being around you. And if you really love them, you will never harm them.

In conclusion, now you know the answer to the question Does Christianity Believe In Karma? The answer is no, because karma is not compatible with the teachings of The Bible. Christianity also does not believe in reincarnation. Christians have only one chance to live a good life. And one chance to spend eternity in The Kingdom of Heaven.

Share
Previous Signs Of The Spiritual Gift Of Discernment
Next Who Are The Watchers In The Bible?