What Is Eclectic Spirituality?

Eclectic Spirituality – also known as Eclectic Paganism or Universalism. It doesn’t have an official definition. But many followers of Eclectic Spirituality tried to explain it over the years. Therefore, a definition might be that Eclecticism is a religion or belief system that allows the members to blend their initial belief system with other religious beliefs or philosophies. In other words, a spiritual eclectic can combine different ideas from different religions. And establish his/her own belief system.

Eclectic Spirituality usually contains a pagan religion, such as Wicca, Neo-Paganism, Environmental Spirituality or others and combines them with Christianity or other theistic religions. For more information, I will answer some questions, to clarify this religion.

What do Spiritual Eclectics believe in? 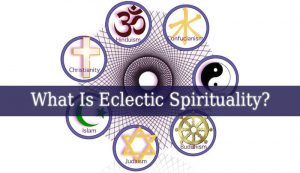 Eclecticism doesn’t have rules. The followers of this religion combine other religions and ideas for a personal belief system. Therefore, they have to follow only the rules of the religions and beliefs that they decided to adopt. And it varies on each member and his/her choices. For example, there are people who combine Shamanism with Christianity. Therefore, they might believe in The Almighty God who created nature, and the worlds. Depending, again, on the elements that they adopt from both of these religions.

How many religions can eclectics combine?

Honestly, there are no borders established in Eclectic Spirituality. The members can combine as many beliefs and ideas as they want. As long as they work great together. Therefore, the possibilities are almost infinite.

Do they adopt only religious philosophies?

No, they also integrate traditions, cultural beliefs and ideas. They sometimes even adopt myths and legends.

When becomes somebody eclectic?

This question has a very long answer. Because it depends on each individual. Or example, if you combine Egyptian beliefs with Wicca, you can call yourself Egyptian Wiccan. Also, if you combine Celtic Paganism with Christianity, you might call yourself a Celtic Christian. Therefore, my opinion is, that someone becomes Eclectic, when he/she combined so much ideas and religious philosophies that he/she can’t can’t be considered a member of any religious belief.

In conclusion, Eclectic Spirituality is a simple belief system, but also complicated at the same time. Their rules are simple, but it is hard to define this belief system exactly.