The 5 Evil Spiritual Creatures To Avoid

Evil Spiritual Creatures – The Spiritual beings come in many forms and with different intentions. They are multidimensional beings that live in other dimensions. But, which can also visit our physical world. Their manifestations are usually called paranormal phenomenons.

There two big categories of spiritual creatures, from the perspective of their intentions. Therefore, we can meet Benevolent Spiritual Creatures and Evil Spiritual Creatures. The benevolent ones are usually on earth to guide and protect us. But the evil ones are here to do the opposite.

Fallen Angels or Demons – they were heavenly angels, before rebelling against the Will of God. The most popular fallen angel is Lucifer or Satanel. But thre are many other fallen angels nown by name like Azael or Azazel. The demons have great powers. And they can take different forms. Acting like shapeshifters. 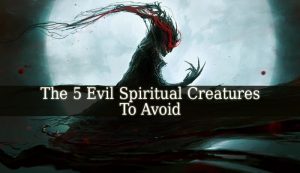 Ghosts – they are apparitions of dead persons. In other words, they are the spirits of people that already lived in our physical world, but couldn’t find its way back. They usually remain on earth due to their attachment to material things. Which they desperately want to protect. Ghosts are not always evil. But they often try to harm human beings.

Poltergeists – are very often met in haunted houses or around paranormal phenomenons. They often manifest themselves harming the people that they can contact. They are also very noisy. And they connect usually with children. Trying to manipulate them to do and say evil things.

Nightmares – they are Evil Spiritual Creatures. A Nightmare causes nightmares (obviously) and night terrors. This evil spiritual being harms human beings by terrorizing them in their dreams. But it can’t harm you in the physical world. But it will still cause some emotional ad mental problems. It s most familiar in the Scandinavian cultures.

Jinns – they are Middle Eastern evil creatures. They Jinn is a harmful shapeshifter. Which can appear not only in human forms, but also as animals. The Quran explains that they are not purely spiritual. Which makes it easier for them to manifest in our world.

These Evil Spiritual Creatures might seem weird at first, but if you are already a spiritual person, you believe in demons, negative energy or dark energy. Just as human beings have free will to do good or bad. The same way, these creature decided to do evil. Most of them chose their destiny. Others were created evil, according to myths, believes and scriptures.