Is Hinduism A Universalizing Religion?

Is Hinduism A Universalizing Religion? 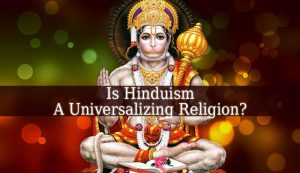 One of the definitions says that a Universalizing Religion is a type of religion which tries to operate on a global scale. It appeals to every people all over the world. Instead of attracting only one group of people which live one place.

We can define ethnic religions as religions that focuses on groups of people living in a certain place. Most ethnic religions are thousands of years old, but with unclear origins. They are mostly sects or parts of indigenous religions. There are two huge exceptions here, Confucianism and Taoism. They both have clear origins and founders. The most popular ethnic religion is Hinduism. Mostly due to the fact that most followers live in the Indian Subcontinent. Yes, there are Hindus all over the world. But the biggest percentage still lives in the Indian Subcontinent.

In conclusion, the answer to the question Is Hinduism A Universalizing Religion? Is easy. The answer is no. Hinduism is not a universalizing religion. It belongs to the other category of religions, the ethnic religions.