Judaism And Zoroastrianism Similarities – These two religions have more things in common than you might think. Although these two religions have different origins, they still have many things in common. Their view on God is similar. But let’s see which are the main Judaism And Zoroastrianism Similarities that we should mention. 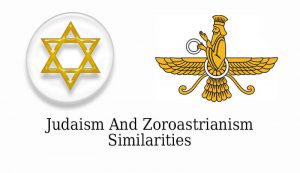 The Concept Of God – both of these religions are monotheistic. They both one God or creator, but not the same one. Zoroastrianism calls God Ahura Mazda. Who is the creator of everything. And who is in constant battle with the evil god. Meanwhile the Jewish God has many names: HaShem, Adonai, Yahweh.

The Chance For Salvation – in both of these religions salvation is very important. The path to salvation is similar for Judaism And Zoroastrianism. Both religion’s followers have to think, act and do good. They also have to have faith in God and love Him.

The Heaven and Hell – the followers of both of these religions believe that there is a heaven and a hell. In Judaism, the heaven is considered to be The Garden of Eden. And the hell is called Gehinnom, a place of punishment and purification. In Zoroastrianism we meet the same concepts. Where Heaven is the kingdom of Ahura Mazda and Hell is the kingdom of the evil god Angra Mainyu.

The Judgment Day – both of these religions believe in judgment on the afterlife. The good deeds and actions will allow you to enter the Garden Of Eden or Heaven. And the bad actions and thoughts will send you to Gehinnom for punishment and purification or to Hell (the darkness and ignorance below).

Their view on Jesus – both of these religions deny Jesus as the Messiah. Therefore, Judaism simply ignores Jesus and doesn’t mention it. And Zoroastrianism has its own savior, Zarathustra. Who was also born of a virgin, just like Jesus.

The Battle between Good and Evil – both of these religions consider that there is a battle between good and evil. In Zoroastrianism it is easier to explain. Because we have the good god, Ahura Mazda and the bad one, Angra Mainyu. Who are constantly in a battle. In Judaism, this battle is mostly inside of each Jew. Although they mention Satan, but they consider him mostly as “Yetzer Hara”. Which are forces tempting human beings and preventing them from doing good. And fulfilling God’s will.

These are just a few Judaism And Zoroastrianism Similarities. If you research these two religions more deeply, you will find many more. Due to the fact that Zoroastrianism is a few hundred years older than Judaism, many consider that the later borrowed some of their concepts from the older one. But this idea has no proof yet. Anyway, they are still two beautiful religions with vast traditions and philosophies.