Home / Angels / Michael The Angel In The Bible

Michael The Angel In The Bible – He is the second angel created by God. The first angel being Lucifer. Michael’s name means “Who Is Like God”. He appears in many religions, not only in Christianity. And he is usually the most powerful and important among the angels. He is the leader of the Heavenly Army. Michael is the chief of the archangels. He lead the Heavenly Army to victory in The War in Heaven. The victory is due to Michael conquering Satan or Lucifer. 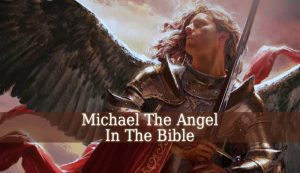 Archangel Michael appears not only in the New Testament, but also in The Old one. And he appears 15 times in The Bible.

The Old Testament refers to Michael as a Prince, but the New Testament talks about him as an archangel.

Firstly, Michael as “The Angel Of The Lord” appears to Hagar the handmaid of Abraham. Michael appeared to her when she went into the desert, not being able to co-live with Abraham’s wife Sarah. The archangel told the pregnant handmade to go back and submit to Sarah. The second appearance of Michael occurred when Abraham tried to sacrifice his son as God told him to. Michael comes and tells Abraham to stop. The archangel explained to him that he doesn’t have to kill his own son. Michael also appeared to Jacob. Genesis is described how God sent Michael to Jacob when he became wealthy to remind him the God brought him the success. These events are all described in Genesis.

In Exodus, Micheal appears to Moses. He is the burning bush that Moses encounters in Exodus 3:2. In the same chapter Michael The Angel In The Bible is described as “The Angel Of The Lord” who lead the children of Israel through the desert. Which event is also in Judges 2:1. Also, in Judges 6:14 Michael appears to Gideon.

The next appearance of Michael is The Book of Numbers. He appears to Balaam in Numbers 23:4,5.

But Michael is mostly mentioned by Daniel. The prophet mentions Michael as a prince. And he appears on The Book of Daniel five times.

But his most appearance in The Bible is in The Book of Revelations. Revelation 12:7 describes the War in Heaven and how Michael conquered the dragon or Satan. He appears as Michael The War Angel.

In conclusion, Archangel Michael in The Bible appears many times, and maybe more times then we think. Because many times he is not called Michael, The Angel Of The Lord or The Archangel. There are many titles to Michael that are more subtle and hard to observe.