Rainbow Around The Moon Spiritual Meaning – Rainbows around the moon or Moonbows are often seen by many people all around the world. Although, it is a natural phenomenon, it has spiritual meanings. The rainbow or halo around the Moon appears due to the ice and dust particles from the atmosphere. The spiritual meaning of moonbow depends on the circumstances that you see it in. And you also have to analyze your life, to understand what message it offers to you. 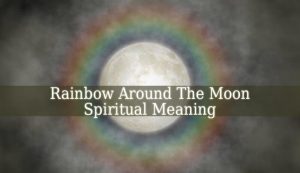 A sign from the angels – when you see a rainbow around the moon or the sun, it is a sign that the Celestial Beings are around you. If you tried to contact them, then it is their response to your call. The rainbows are messages of encouragement from the celestial world. They encourage you to continue your path. And the angels want you to know that they guide you through the difficulties. Each Celestial Being that God sent to protect you, loves and guides you.

A symbol of hope – the rainbow around the moon is a symbol of hope and faith. The appearance of a rainbow in the darkness is mysterious and powerful. And it is a message that even in the darkest situations, there is a little hope shining through. It is an encouraging message to never give up. And to have faith that everything will be alright.

A symbol of increased energy – many people with psychic abilities witness an increased energy levels in the nights with moonbows. Therefore, the rainbow around the moon became the symbol of higher energy levels around the earth. We are all surrounded by energy. There’s energy around and within us. And we function with energy. But the intensity of the cosmic or divine energy fluctuates. Being sometimes higher then other times. Also, seeing a rainbow around the moon can be a sign of clair-voyance. Many people with this psychic ability see the moonbow, when others don’t.

Rainbow Around The Moon Spiritual Meaning – many people deny the spiritual meanings of this natural phenomenon. But it is still mysterious and full of enigma.