The 3 Types Of Benevolent Spiritual Creatures

Spiritual Creatures – Many people experience paranormal phenomenons. They are mostly created by spiritual beings trying to manifest in our physical world. But what are these creatures? Well, the Spiritual Creatures are multidimensional beings that live in higher or lower dimensions than ours. They often interact with our tri-dimensional world. Leaving miracles and unexplained phenomenons behind.

Spiritual Creatures that want to do good 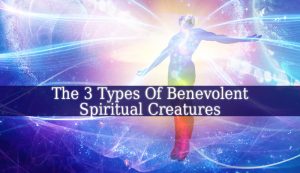 Ascended Masters – they are spirits that watch over humanity. They were incarnated as humans before. But they have found Spiritual Enlightenment and they became pure spirits. Which will not need to incarnate again. They are usually the spirits of spiritual leaders that found the way out of the repetitive incarnation. And they also found a way to erase or pay they karmic debt. These spirits are benevolent. And they want to guide us to enlightenment. Sending us knowledge and wisdom.

Spirit Guides – they are the spirits of normal human beings, who are between two incarnations. When between incarnations, they usually act as spirit guides. They watch over their relatives, family members, loved ones, friends. Many of the diseased choose to stay a little watching over their family ad guiding them, before ascending and getting ready for another reincarnation. Therefore, many people on earth have a parent, grandparent, aunt/uncle guiding them.

Angels – they are also Spiritual Creatures. But they are different than the other two types above. Because the angels have never been humans. They have never been physical beings. They are pure light since they have been created by God. The angels are benevolent and they constantly watch over us. Each human being has at least one guardian angel. These guardian angels make sure that you are on right path that you have chosen before incarnating. They save us from unplanned dangers. And they also make sure that we get in the dangers that we should, to learn the right lesson.

Finally, the Spiritual Creatures are beautiful beings. But you have to be open minded to sense and distinguish them. If you ever felt that a diseased relative is watching over you, it might be your intuition. Many people also sense their guardian angels. And others have the ability to listen to the Ascended Masters and ask for guidance. If you need guidance, these 3 kinds of spiritual beings will always be by your side.