Spiritual Meaning Of Spiders In The Bible

The Spiritual Meaning Of Spiders In The Bible

The Spiritual Meaning Of Spiders In The Bible 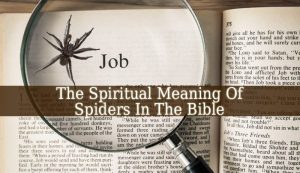 In Job 8:14 the term “spider web” is mentioned. It symbolizes fragility and weakness. This Bible verse talks about the trust in a hypocrite. And this verse compares that trust to the spider web. Which is fragile and too weak to rely on.

In Isaiah 59:5 the spider web appears again. Here it symbolizes a fragile and useless act. This verse talks about the wicked. It explains how the actions of the wicked are in vain and useless. Comparing it with the spider web. Which, is useless for humans, but useful for the spider.

In Proverbs 30-28 the Hebrew version is translates spider as “lizard”. But in the context of the verse, can easily mean spider. Because in Palestine we can find over 700 species of spiders. This verse talks about how tricky and smart spiders are. Because they can be caught by hand. But they are still everywhere. And even in the palaces of kings. In this verse the spider symbolizes the craftiness and wisdom of the spider. Who can survive, even though it is fragile and easy to catch.

In conclusion, spiders and their web appear in The bible. But The Spiritual Meaning Of Spiders In The Bible varies depending on the context. Read the three bible verses and find yourself a meaning.