Tengri Shamanism – also known as Tengrism, Tengriism or Tengrianism. It is a religious belief originated from Central Asia. Many cultures from Cnetral Asia had this ancient belief as their dominant religion, such as Turks, Mongols and even Hungarians. But it was also the religion of the five Turkic cultures. But this religion still exists. Many Mongolians still practice Tengri Shamanism and they pray daily to Munkh Khukh Tengri.

The Deities of Tengri Shamanism 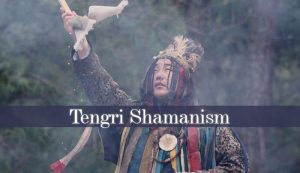 Tengri – The most important thing in Tengri Shamanism is Munkh Khukh Tengri. Which means “The Eternal Blue Sky”. The main destination of their daily prayers. They worship the eternal blue sky as the main supporter of their existence. Alongside with Eje or Umay. Which is the mother earth type of spirit.

Umay – she is the goddess of fertility. She also often associated with the earth-mother goddesses. The word “Umay” come from the Mongolian “Umai” which means “womb”. Umay the goddess is the protector of children and mothers.

Bai-Ulgen – it is the deity of creation. And the next more worshiped deity after Tengri. He is the god with no end and no beginning. Therefore, he always existed and never stops being. His name comes from Turkic Bay (rich) and Ulgen (magnificent). He lives in the sky above the stars, moon and sun. Bai-Ulgen is the protector of humankind against the evil deity Erlik.

You might enjoy my views on Anglo Saxon Shamanism.

Erklig – the powerful God of Space. He moves the stars, moons, planets and every cosmic objects. In Tengri Shamanism, Erklig is also the master of the planet Venus. Tengri beliefs sustain that the falling stars are the hot arrows of Erklig (see also Star Symbolism for more information).

Erlik – he is the evil deity of the underworld. He is also the deity of death. Erlik is the first deity created by Bai-Ulgen. But Erlik became full of pride. And his actions lead to his banishment to the underworld or hell. Erlik was also present at the creation of humanity. He teach humanity how to sin. Shamans often describe him as a monster with human body but the face and teeth of a pig.

Tengri Shamanism is a fascinating world. It is full of mythical creations, deities, gods and symbols. If you want to find out more about this miraculous world, you can find books about it. And there might be also courses in your city.