Home / Spirituality / The Basic Outlook On Life, Formulated By Buddhism, Is Contained In The Four Noble Truths

The Basic Outlook On Life, Formulated By Buddhism, Is Contained In The Four Noble Truths 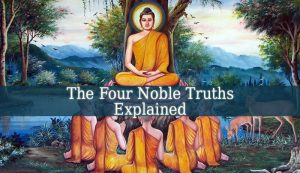 Dukkha – The Truth Of Suffering

The First Noble Truth is “Life Is Suffering”. Although this is the most popular translation of the first truth, there are many other translations. For example, numerous scholars and monks translate the truth as “life is stressful”. Although it seems a really pessimistic message. It is true. Suffering is everywhere around you. Even your physical body and consciousness are suffering. This is why Buddhists want to reach Nirvana. The absence of suffering.

Samudaya – The Truth Of The Cause Of Suffering

The Second Noble Truth uncovers the cause or origin of suffering or Dukkha. Which are mostly greed, desire, thirst, cravings, expectations, attachment and many more. Also, the appearance of the “ego” or “me” will have suffering as consequence. As long as you look at your life as “you” and “others”, you will only create suffering in your life. Hence, Buddhists practice meditation and spiritual practices to minimize and even banish their ego. They also practice living without judgment, manipulation, attachment or thirst for material things.

Nirhodha – The Truth Of The End Of Suffering

The Third Nobble Truth brings hope to every human being that there is a cure for suffering. And the solution is to stop craving things. But this doesn’t come so easy. You can’t wake up one morning, promising yourself that you will no longer crave or desire a thing.

But, if you understand the origin of your craving, than you will end it at its core. In other words, you desire something because you think that it will make you happy. But you can’t maintain your happiness with material things. Happiness and safety should come from within, not from other sources. When you understand this, you will look at craving and desires with other eyes.

Magga – The Truth Of The Path That Frees Us From Suffering

The Fourth Noble Truth is The Noble Eightfold Path. It contains the 8 most important steps in eradicating suffering. It is the cure for Dukkha. It is a set of rules that penetrate the everyday life of every Buddhist. They have to apply these rules in their speech, thinking, approaching of others and their everyday mindfulness practices. Although it is the fourth, but it is the most important truth. Without the fourth truth, the other three would be only theories to debate. Practicing the Fourth Noble Truth, you will get closer to Nirvana and you will have Dharma in your life.

The Basic Outlook On Life, Formulated By Buddhism, Is Contained in The Four Noble Truths – These represent the core of Buddhism. A collection of theories and practical knowledge about life and suffering. Approaching the essence of humankind like no other religion does.

Share
Previous In Which Way Does Hinduism Differ From Other Religions?
Next Rainbow Quartz Crystals