Who Represented Hinduism At The First World Parliament Of Religions? 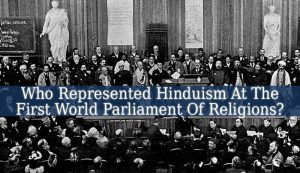 This event took place with a clear goal. To create a global dialogue of faith. The idea of the congress came from Charles Carroll Bonney, the layman and judge of Swedenborgian. As a result, it opened on September 11th 1893. And it was held in the World’s Congress Auxiliary Building. The parliament took 16 days, closing on September 27th..

The religious leaders and representatives that attended the Parliament of the World’s Religions were:

Also, the whole event’s chairman was clergyman John Henry Borrows. There were many more representatives and speakers, such as Rev. Henri Jessup. The first person to discuss the Baha’i faith in the US.

Swami Vivekananda held the opening session of The First Parliament of the World’s religions. He was very nervous, because he didn’t know how the audience will react to his speech. Holding a speech about a huge religion such as Hinduism to a crowd of 7 thousand people is not easy. But his first sentence got the crowds attention. Therefore, he started his speech with “Sisters and brothers of America!”. This is the sentence or salutation that made him so popular and easy to remember.

Share
Previous What Global Religion Was Created In Response To Aspects Of Hinduism?
Next Is Hinduism A Universalizing Religion?