Home / Spirituality / The Religion Of Sikhism First Developed In

The Religion Of Sikhism First Developed In

Where Did The Religion Of Sikhism First Developed In?

The Religion Of Sikhism First Developed In the Punjab Region of India. The religion was founded around the 15th century by Guru Nanak. Who is the first teacher and guru of Sikhism. He established the Kartarpur (The Town of The Creator) in 1520and gathered the Sikh community there. The teachings of Guru Nanak represent the basis of Sikhism. But other 10 gurus follow him with other teaching. All of which are in The Sikh Code Of Moral Conduct.

Sikhism didn’t spread a lot from the Punjab region. The majority of Sikhs remaining there. Living harmoniously according to the 3 major principles of Sikhism. Which are the following: devote yourself to the One Creator, earn an honest living and share your earnings with those in need. Believing strongly in social, intellectual, spiritual and financial equality.

Where did The Religion Of Sikhism First Developed In? 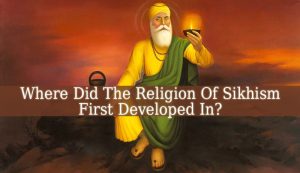 Ik Onkar is the name of God in Sikhism. It translates as “The One Supreme Reality”, “The One Creator”, “The All Pervading Spirit”.

It is a genderless God. Having other names such as “Nirankar” (God without a form), or “Akaal Purkh” (God beyond time and space).

The Importance of Non-Attachment

In Sikhism non-attachment id very important. They know the negative effects of the material world upon us and our salvation. The material things offer only temporary and illusory satisfactions. And they also fill us with pain. This is why the concept of “Maya” became important for Sikhs. This concept can be translated as “Unreality” or “Worldly Illusion”. “Maya” being our worldly life, just an illusion.

And the Sikhs have to conquer the Five Thieves of this illusory world. The Five Thieves in Sikhism are: the ego, anger, attachment, greed and lust. And you will achieve salvation, only if you conquer these temptations.

The Religion Of Sikhism First Developed In

In Sikhism, liberation has a major importance. Guru Nanak has numerous teachings about achieving liberation. Jivanmukta translates as “salvation or liberation whilst alive”. Although Sikhs believe in reincarnation and karma. They also believe in liberation. And they see birth as a blessing. Trying to make the most of their lives. To obtain salvation, Sikhs mainly avoid The Five Thieves of Maya. But they also live devoted to Ik Onkar. And they meditate a lot.

In conclusion, Sikhism is a very interesting religion. Based on kindness, equality and helping one another. Now you know that The Religion Of Sikhism First Developed In Punjab. But it succeeded in gathering more than 25 million followers. But the vast majority still lives in Punjab. Close to Kartarpur.

Share
Previous Branches Of Sikhism
Next Similarities Between Zoroastrianism And Christianity