The Spiritual Meaning Of Pearls

The Spiritual Meaning Of Pearls

The Spiritual Meaning Of Pearls – They are beautiful, rare and expensive. But they are also powerful. The pearls hold a powerful energy. They are charged with the positive energy of the ocean and water. But The Spiritual Meaning Of Pearls is vast. It depends on cultures and religions. Different ancient civilizations had different myths and beliefs about the meaning and power that pearls hold.

The most common meaning of pearls is that of wisdom and wealth. Therefore, they bring wisdom, wealth and good fortune. But they were also often used for protection. Jewelry made of pearls can affect the wearer, filling her/him with peace and calmness.

Another Spiritual Meaning Of Pearls is that of purity and integrity. It symbolizes loyalty and a sense of generosity.

Spiritual Meaning Of Pearls – What pearls symbolize in different cultures? 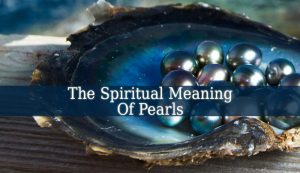 In Hinduism and Christianity the pearls are a sign of purity. Therefore, it became a tradition for brides to wear pearls as a sign of their purity. But they also mean religious purity. And overtime they became sacred objects.

In Islam the pearls symbolize perfection. The Qu’ran describes the pearls as rewards of those who reach The Paradise.

More ancient civilizations, such as the Persians considered pearls sacred. They created legends that said that the pearls were created where the rainbow meets the earth. And they explain that the imperfections on a pearl are a the results of the thunders and lightnings.

The ancient Chinese civilization seen pearls as a symbol of wisdom. They also created different legends about pearls. A legend says that the these beautiful pearls are created in the head of the dragons. When the pearl is fully formed, it travels to the teeth of the dragon. And stays between its teeth. And the Chinese warriors had to slay the dragon, so they can gather all the pearls from its teeth.

Ancient Japanese civilization had different perspectives on pearls. And also different legends. They considered pearls the tears of mermaids and angels.

The ancient Egyptian civilizations also considered pearls to be sacred. The wealthiest of the Egyptians, who could afford them, even wanted to be buried with their pearls. The pearls were rewards from the Egyptian Gods. Cleopatra even drank pearls by melting them and putting them in her wine. She did this to get closer to the Gods.