Transcendental Meditation Vs Mindfulness – These are both meditations, but they are still very different. Some people choose Transcendental Meditation, due to its benefits, but others choose Mindfulness Meditation. And there are others who need to see the difference between the two, so they can make a choice. Well, if you are in doubt. And you want to see which meditation method suits you, then keep reading.

The 5 Differences Between Transcendental Meditation Vs Mindfulness

The Origins – these two meditation methods have different origins. TM is a Hindu meditation. On the other hand, Mindfulness meditation has its origins in Buddhism. 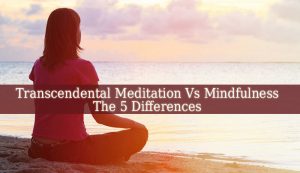 The History – I will start with TM (Transcendental Meditation) because it is the youngest. TM was developed by Mahareshi Mahesh Yogi in 1955. Then it quickly started to spread all over the western world. Due to the huge amount of celebrities starting to practice it. On the other hand, Mindfulness is thousands of years old. Coming from Buddha himself Buddhist monks practice and cherish it for a long time. It started to spread all over the world mostly with the new age movement.

The Session – these two meditations are very different as practice. TM is some kind of mantra meditation. It consists of the practitioner staying in lotus position for 20 minutes and repeating a secret mantra. That only initiates know. But mindfulness meditation is a very simple practice. You have to focus on your breathing and how your body feels. The idea is to focus on one thing and let the thoughts flow. You can even use Meditation Tools. Until, at one point, the thoughts cease to appear. And you experience mindfulness.

The Price – as I mentioned below, you can learn TM only from the teachers of the organization. Who will charge you. And we don’t talk about small amounts of money. A TM course costs at least one thousand dollars. On the other hand, Mindfulness Meditation is mostly free. But you can find some cheap courses, books or CDs about how to learn it.

In conclusion, the difference between Transcendental Meditation Vs Mindfulness is huge. They have different origins, different history and functioning. If you still don’t know which one to choose, I can help you. I recommend you to try a cheap mindfulness course. If it doesn’t work, and you have the financial possibility, then try a TM course. This way, you will see yourself the difference.