What Is Yoruba Spirituality?

Yoruba Spirituality is spiritual philosophy with West African origins. Researches show that Yoruba is a ten thousand years old religious belief. The name of this spiritual movement comes from the name of the tribe or culture that practiced it, the Yoruba tribe. This spiritual practice started to spread all over the world, due to migration and the slave trades. But many people still practice it today. As a way to return to their roots and ancient culture. The basic concepts rules of Yoruba Spirituality are simple. The person has to discover his fate and life purpose. He has to establish a connection with nature’s spirits, his ancestors and the Creator. In Yoruba, the highest god is Olodumare. The creator of everything.

Yoruba has a genderless almighty god – Olodumare is the almighty creator, which leaves in heavenly world. Also, you must know that this god has no gender. It never comes to earth. But it has holy messengers, angel like creations. Called Orishas. 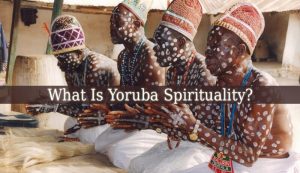 Yoruba has angels – the Orishas are the messengers of Olodumare. But they are not all angel like. Many Orishas are people who ascended. Others are spiritual beings. Also, the Orishas are more human like, than angel like. The Yoruba beliefs say that the Orishas fall in love, marry, divorce. They have personalities and free will. Yoruba priests often perform ritualistic dances to ask the Orishas to possess them, for a spiritual experience.

Yoruba has demons – this culture has evil spirits too. They are responsible for every negative situation and accident. They also provoke illness. These evil spirits are called Ajoguns. If a person struggles with a Ajogun, he/she has to visit a priest. Which will banish the Ajogun with different rituals.

Yoruba believes in Reincarnation – the followers of Yoruba try to reach reincarnation, instead of escaping it like Buddhists do. They believe that when someone dies, after living a good life, he will reincarnate in the same family he lived his life in. Although there is a Heaven and a Hell that they can go to. But maintaining a balance in your actions, will get the Yoruba follower to reincarnation.

Yoruba believes in the destiny of choice – before reincarnation, the soul has the opportunity to choose its own destiny. Therefore, the spirit will reborn with a fate or life purpose. But each individual forgets his/her fate after birth.

Yoruba believes in energy – the whole spiritual philosophy embraces the belief in an energy or life force (just like prana or chi). The Yoruba followers call it Ashe. This ashe penetrates everything. It flows through every creation.

Yoruba has chosen ones – every tribe has a chosen one. This person will be trained to communicate with spiritual realms and the spiritual beings, Orishas. These chosen ones are called Babalawo (male) and Iyalawo (female). These people don’t have supernatural powers. They are just well trained in rituals and ritualistic dance.

In conclusion, Yoruba Spirituality is a deep and very old spiritual philosophy. It believes in a single almighty God, in spiritual beings, reincarnation and a life force that flows through everything. It is also very impressive how there still are people practicing this religion, after thousands of years.